Eve Agnew is one of the sorority sisters in the 2006 remake.

Eve is the quiet and weird, but kind sister. She is first introduced when Heather is about to leave and bumps into her. Eve then reveals she drew Heather's name for the secret Santa activity and gives her her present, which is a glass unicorn. Heather takes the figurine goes upstairs to pack her bags, and Eve begins acting a little weird, suddenly vanishing when Mrs. Mac is looking for her present under the tree. This raises suspicions about her, even prompting Dana to say the only place she has to be is "The island of misfit toys" and she has no boyfriend or living family left, hinting that they don't get along well. Later, when they find a present to them from Billy under the tree, Heather realizes it's the same newspaper as the present Eve gave her, and goes up to her room to investigate it, where she finds newspaper clippings of Billy's killing spree 15 years prior and Megan's cell phone.

After Dana is killed, the girls receive a call from her cell phone. Terrifred, they go outside to look for her,  but instead find Eve decapitated in her car. Her disembodied head is later hung as the star on the top of Agnes's corpse Christmas tree.

Top: an alternate shot that shows Eve's body in her car. 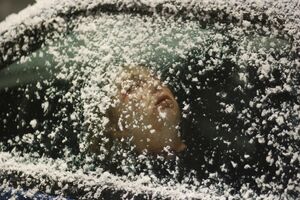 Retrieved from "https://blackchristmas.fandom.com/wiki/Eve_Agnew?oldid=5638"
Community content is available under CC-BY-SA unless otherwise noted.